Go Sulk in a Hole

Here’s another post that will get some people upset. I know there’s lots of things at fault in this town, and for those that like equal opportunities, this may not be the best neck of the woods, but for someone who has now officially lived abroad half of her life, and the other half ‘in-country’, I say “what are you bitchin’ about?”
Okay, so people litter, traffic is horrendous, politicians corrupt, pollution abound, social services non-existing, nature abused, heritage not respected and to have to pay for beach access is ridiculous and I could go on and on. To assume that the grass is greener on the other side is natural, and probably true for many, but to see beauty, you got to open up to it.
I, obviously, am open to beauty. And so I will show you the beauty of a free beach. This morning, I joined a group of dog walkers on their daily walk along Ramlet el Baida. This beach in Beirut is the only public beach left in Beirut, and if I were a guy, this is the place I’d be all summer long. For women it is slightly different; you can swim, but a bikini is not advised. You will be left alone, but if you want to swim in tranquility, a T-shirt and shorts are advised. At least.

But for walking the dog at 6:30 in the morning, it is fantastic. Beirut is still asleep, traffic on the boulevard is light (especially with Ramadan now), and you have the city to yourself. The beach itself is about a kilometer long, a bit longer if you walk from end to end.
This morning, the only beach goers were two hard core tanners, a small family having breakfast there, and a man that probably slept there the night. One garbage collector was walking along the shoreline picking up cans and other odds and ends that were either left behind the day before, or got washed ashore during the night.
The paddle ball crowd – guys that spent entire days on the beach playing back gammon and beach racket ball, a ball game played with a wooden paddle - will show up around eleven.
This early in the day, the high rise on the other side of the road casts shades over the beach, and it’s nice cool. Usually there’s a pack of semi-wild dogs roaming there as well, but I didn’t see them this morning. The number of dogs and dog walkers varies each morning. The dog walkers all work; after their beach hike, they hose down their dogs and go to their respective jobs. All in the same city. 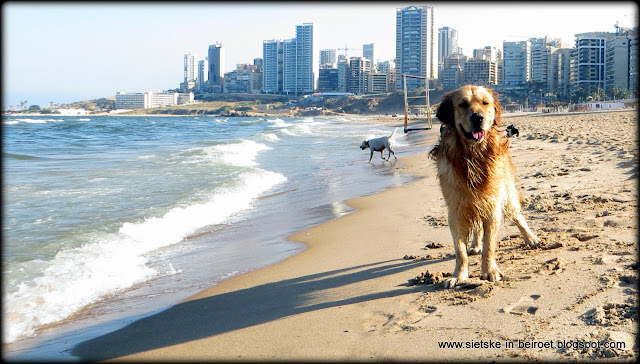 Do the dogs shit on the beach? Sure they do. That mixes quite well with what you discharge in your toilet, which eventually ends up in the sea as well. It seems the fecal matter content of the sea water is so high, it borders on the toxic. But what are you complaining about? If you booked a trip to Rio de Janeiro this summer, the quality of the sea water is just about the same.
I was just there this morning, didn’t spend a penny, wasn’t wading through piles of garbage, and I am not the only one who likes the place. And there’s other things you can do at the beach. This guy started a surf club, so no need to go abroad for that; the waves are apparently quite acceptable (hat tip to beirutbrightside, another blogger who sees beauty in it all).

So no more complaints about representing Lebanon in an unrealistic way, you grim people.  Otherwise, go sit in a hole and sulk.
Geplaatst door Sietske op 09:45

Many many thanks for giving us hope, spreading positivism and opening our eyes.
Best

This naturally beautiful country could be so much more, a self sustaining civil society..