It may surprise you that there are places in Lebanon I haven’t seen yet. It surprises me too. But there are. Jezzine is one of those places. Everybody I know has been to Jezzine. But not me.


Now that my parents are in town, and I had to day off, I figured a trip to Jezzine would be in order. My parents, after all, have been holidaying in this place as long as I’ve lived here, and they’ve seen pretty much everything there is to see. Except of course, Jezzine. 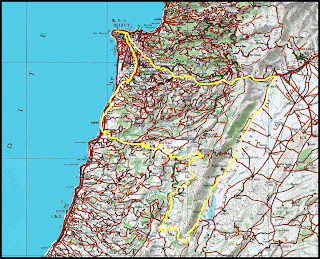 And so I planned this lovely road trip to Jezzine. I didn’t want to do the regular road, because I know that area like the back of my hand. I planned a very interesting route. Over the mountains, into the Bekaa Valley, than down south alongside the mountains and the Qaraoun Lake , back over the mountains, and voila, there would be Jezzine.

Lovely plan, no? I bet you think there’s something more to it. Ahhhh, patience. Off we went. We first drove to the Bekaa. The Bekaa Valley was – although overcast – lovely. It is spring, and Lebanon is at its greenest.

﻿ ﻿
‘Known as the “breadbasket” or “granary” of the Roman Empire, the region still continues to operate as the main agricultural province of Lebanon. The warm climate and fertile soil, make the Bekaa Valley the centre of wine production in Lebanon, housing some of the country’s best vineyards . Because of the importance of the Bekaa Valley as a place of provision, some of the largest Roman temples ever constructed were located here.’ (source)
It’s an understatement that it is the agricultural province of Lebanon. There’s agriculture all around you. ﻿ 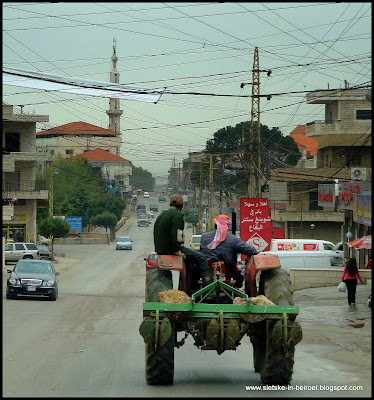 ﻿﻿  tractors for moving irrigation pipes around, 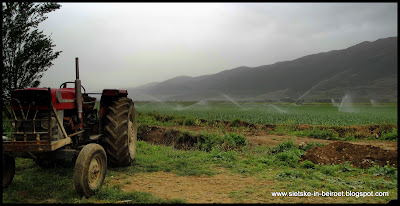 ﻿
to irrigate the fields. I think these were onions. You can see my superior agricultural knowledge.
Lebanon is the only country in the region that does not have a water shortage yet, but we’re not far from it.

﻿ Research has shown ‘a clear regression in the amount of available water from different sources in Lebanon. These sources, which are under the impact of human like rivers and groundwater, showed a 23–29% decrease in the amounts of water since the last four decades. While sources, with less human interference, like snow cover and precipitation have been decreased by 12–16%. However, in both cases, the status is quite alarming and needs immediate water management plans to conserve water resources in Lebanon. ‘
And not only are we getting less water, we're using more of what we get. And since it is harder to come by, everone drills his own wells, deplating the available stock, and in the process, often contaminating that what is still there. 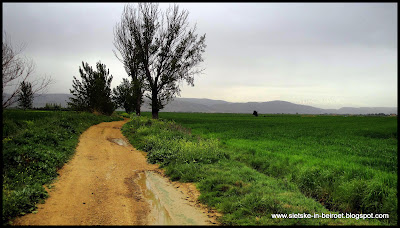 I tried to make a short-cut,

but we got totally lost in the fields.
We then passed by Chateau Kefraya,  which is one of the major wine producers in Lebanon.

The Bedouin ladies were out in full force, working the wine fields. Agriculture in Lebanon is a labor intensive industry. Most crops are harvested and lands tilled still by hand. It’s the Bedouins that do that. In fall you can see them, truckloads full of colorful ladies (somehow I see the women more often than the men), being transported from one field to another.

I’m an avid fan of their Blanc de Blanc (of Kefraya, stay tuned please), which in recent years has seen a steady rise in price. Now that I was in the neighborhood, I thought I’d score myself some bottles at wholesale price. I mean, that’s what is the deal in general, when you go to the producer, instead of the producer coming to you, no? And if you buy 12 bottles instead of one, you get a better deal, no? I mean, outside in the real world, that’s what it is like. Not at Chateau Kefraya. Whether I buy it from the factory, or the supermarket, or whether I buy one bottle or a dozen, price is the same. That sort of defeats the purpose. I guess next time; I’ll buy at the neighborhood mini-market again. I’d rather have the local dikkaneh profit from it than the Kefraya owner. ﻿
﻿We then drove alongside the Lake Qaraoun, which is fed by the Litani River. It surprises me that the region is as empty as it is. I’d think if people want to have a house in Feraya, where there is absolutely nothing at all to see, except for snow some 3 months a year, many more might want a summer house here. But it does not seem to be the case. That’s probably a good thing.﻿ ﻿Most villages were absolutely deserted. 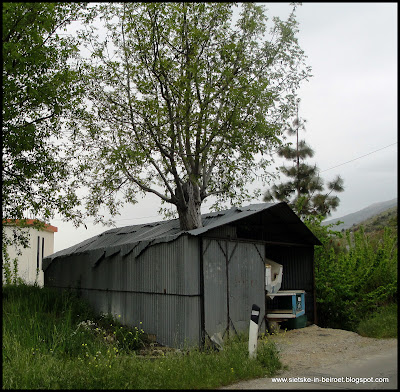 Time goes slowly here. The trees grow through the roofs of the sheds, and people accomodate to that. I like that. (Or maybe they built the shed around the tree, more likely) 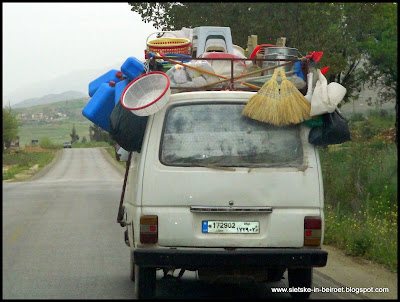 Not many shops either, so these little cars drive around, selling everything you can possibly think of.
And so on and on we drove, on our way to lovely Jezzine (Or so I have been told by many), until we hit a military checkpoint near Ain el-Tine. We were now 100 kilometers away from Beirut, and almost in Jezzine. 15 more kilometers to go. I almost didn’t stop. I hardly ever stop, as the soldiers in general just wave you through. Not these guys.
“Hey! Hey!” they yelled, as I passed their check point.
I backed up, thinking they were going to be cute.
“Where you go?”
“Jezzine.”
“You have bassbort?”
Passports? No dude, they’re at home, in Beirut. I was the only one in the car carrying any ID, my Lebanese ID.
“They?” the soldier asked, pointed at my parents.
“No, no passports.”
“Then no Jezzine.”
Turns out we were about to enter the old ‘security zone’. It used to be under Israeli occupation forever, until Hezbollah came, saw and conquered, in 2000. The Lebanese army is now in place, but that is in name only. And ever since they are in place, they’ve blocked it to foreigners. Foreigners may only enter with permission from the Ministry of Defense. I don’t understand why this is the case, it’s not like the place is more dangerous than other parts of Lebanon. And if they do it to ensure no spying is going on; well, the last few spies they picked up were all Lebanese. One was even a military man.

“You don’t have wasta?” asked the soldier at the check point. “Someone you know in the army that you can call to get you through?”
"Well, that would be you," I replied. Other than that, I have no wasta, I assured him.
“Then the only way to Jezzine is back to Beirut.”
﻿
﻿﻿﻿﻿﻿ 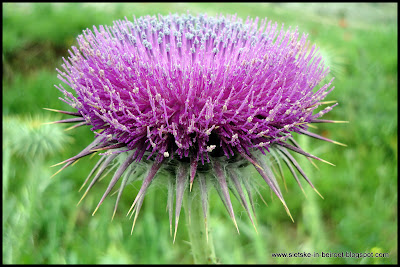 And that was the end of this very interesting road trip  I had planned to Jezzine. Needless to say, I still haven't visited Jezzine.
Geplaatst door Sietske op 07:22

LOL I knew while reading your post that something will turn wrong , lovely pictures btw

Sietske, I am very interested to see how you complete this story. I am arriving next month from England on a wine tour and planned on doing your trip in reverse by visiting Karam Winery (near Jezzine) and also visiting the famous waterfall (allegedly the fifth tallest waterfall in the world) at Jezzine and driving over the top of the mountain after to Lake Qarauon where our hotel is.

You were in my little corner of the woods. Too bad you were not allowed to reach your destination. Jezzine has changed a lot in the past years, even the waterfall is more and more stingy as the years progressed, but still worth visiting.

Sietske,
Same thing happened to me. My wife is an American and we could not go through. This was established after the Israeli army withdrew not for spying purposes, but so that foreign nationals do not get to the border area and cause trouble.

Alistair,
you can get from Jezzine to Kefraya, but you'll have to take the road over the mountains, by Mazraat es-Chouf. You cannot move around the mountains into the Beqq. Bit of a bummer, but you'll love he scenery, and as an added bonu, you'll pass by a beautiful cedar reserve!
Sam,
"so that foreign nationals do not get to the border area and cause trouble"? That would be me they made that rule for I guess. :)
Marillion,
what a beautiful neighborhood. I'm thinking of planning a mountain house there. How are the locals there?
Hjt,
you want an update? Bicnic, Pappeque, bancakes and the last one was Piel, herewe wanted to visit the Souq el tayeb. Teenager is getting quite good at clearing tables. Hotel Management might be in good order for him after high school.

It is a very relaxed way of life. especially in my little village of Keytouli where the people are very friendly (and mainly related to one another).