We ‘did’ Tyre on Friday, Lebanon’s southernmost city. Tyre has a very long and rich history, some say dating as far back as 2,700 BC, but I like its Roman part the most. Tyre was ‘incorporated’ (we’d say ‘occupied’ these days) into the Roman Empire in 64 BC, and the Romans left lots of monuments in its wake, including an aqueduct, a triumphal arch, a roman road, a necropolis and apparently the largest hippodrome in the Roman world. 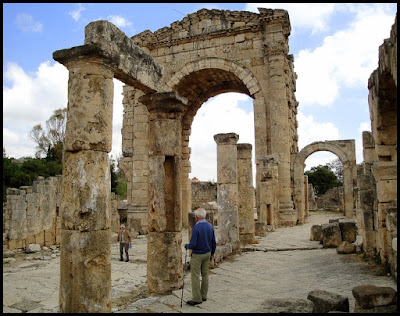 There’s a three-bay monumental arch. The archway stands astride a Roman road that led into the ancient city. My dad is on the sidewalk, my mom on the road.
I find the road the most impressive part; it comes complete with sidewalk. The Romans were the first civilization that built and maintained a systematic network of roads through their empire for military and trade purposes and Tyre was also connected. The part where the pavement is still in place runs from the triumphal arc (triumphant for what I haven’t been able to figure out) to the old Roman town (which now lies partially buried under the new town). 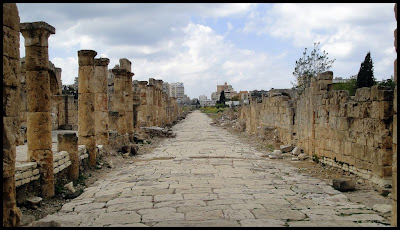 A genuine colonnaded Roman road.
I am into Roman roads, so to speak. In my next life, I have decided, I am going to study archeology & history, and will focus on Roman roads. Just so you know.
I found this web site  with a very interesting article on the Roman road network in this region. It is written by ‘the enemy’, as they say here in Lebanon, but I figure since I am not in contact with the man in question, I am not in violation of anything. It is a good read. He’s into Roman roads as well. 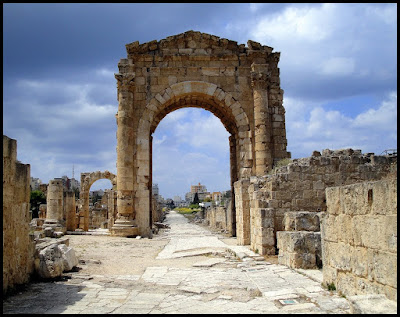 Here are some parts of his article;


'The Romans considered a well organized road network and an efficient traffic system as basic elements for proper imperial administration. Consequently, they invested great efforts in the form of resources, planning, labor and technological skill in road building. (…) Inscribed milestones were added at fixed intervals of one Roman mile (ca. 1.5 km), indicating the name and titles of the emperor under whose rule the road was constructed or repaired. The milestones also mentioned the distance to and the name of the caput viae, that is the official destination of the highway, which normally was a main city or a chief military camp. 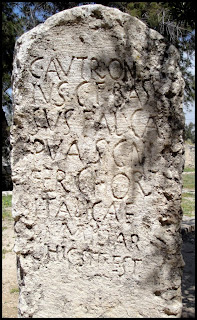 Should have chosen Latin in school, then I would have known whether this was a mile marker or not. It looks like one.
The Roman Empire, which included Provincia Judaea, later named Palaestina, and Provincia Arabia, spread over an area of ca. fifty thousand square kilometers on both sides of the Jordan River and the Aravah, were gradually covered by the Roman imperial authorities with an impressive network of about 2,500 Roman miles of first-class built highways, of the kind just described.
The road network (…) served as a first class instrument of control of the two provinces. (…) In times of war, rebellion and desert raids the roads permitted the efficient transport and command of military units to and in the war zones and troubled areas. They also permitted to carry war machines, food supplies and camp equipment to those units.

It should be emphasized that the road network under discussion was not a closed traffic unit of its own, but a part of a much larger system of communication that covered the whole Roman Orient. (…) Throughout the Early Christian and Byzantine period, that is, from the fourth through the seventh centuries C.E., the road network just described continued to function. (…) 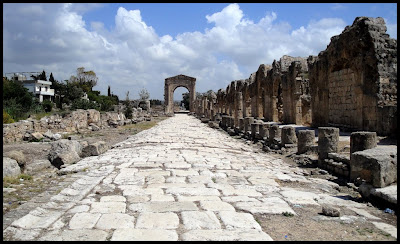 All roads lead to Rome, they say.
Widespread use of the road-network under discussion continued during the Early Muslim period. (…)However, after the fall of the Umayyad dynasty in the middle of the eight century and the ascent of the Abbasids, the importance of our region seem to dwindle in the eyes of the central government. That attitude had a negative effect on the maintenance of the road network and brought to its gradual decline and abandonment.' 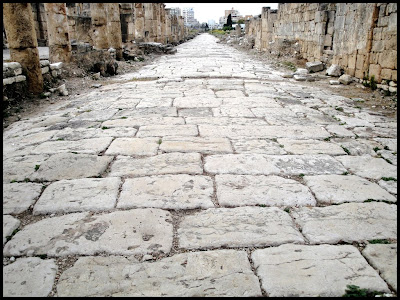 2,000 year-old pavement
And so to walk over a stone road that basically has been there for almost 2000 years, is quite impressive. The Romans were the first to include sidewalks, which were higher than the main street, end a curved pavement, so the water could drain faster. 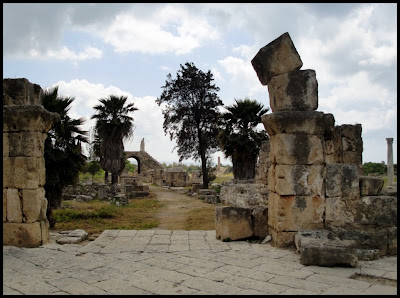 There’s more to see in Tyre of course. There’s one of the largest and best-known hippodrome of Roman times, built in 21 AD, complete with supporter bleachers. A part of the grandstand still survives (you can see it in the background). ‘The 480-meter structure seated twenty thousand spectators who gathered to watch chariot racing. Each end of the course was marked by still existing stone turning posts. Charioteers had to make this circuit seven times. Rounding the post at top speed was the most dangerous part of the race and often produced spectacular spills.’ Source
Here’s more on Roman roads, unfortunately most of it on the ‘other’ side.
I wish someone in Lebanon would undertake that task and record all Roman roads and bridges in Lebanon. Talking about tourism; that would really be something to visit. We’re having the LMT (Lebanon Mountain Trail), an excellent endeavor; How about the LRT (Lebanon Roman Trail)? Anyone? I’d help! 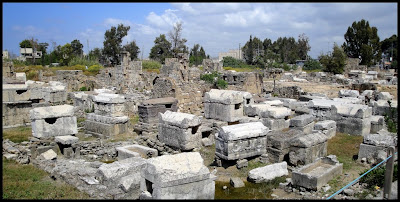 And then there’s a vast necropolis (graveyard), with some 300 sarcophagi dating from a number of time periods (Roman, Byzantine) alongside a 500 meter long Byzantine pavement.  There’s sarcophagi wherever you look. 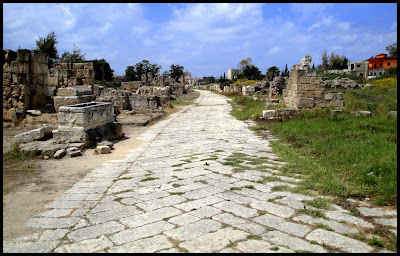 Byzantine road; Not as old as the Roman one, but still pretty old. It's on the other side of the arch. 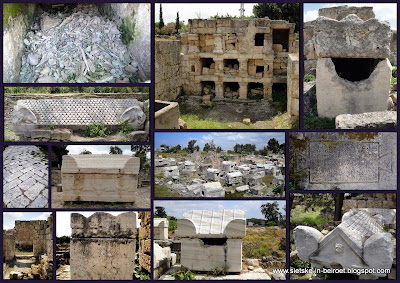 According to this source: The funerary enclosures constructed at Tyre represent a new type of tomb architecture, introduced in the 1st c CE. These tombs were large, aboveground, elaborately decorated and grouped together alongside the main roads leading to the city. Due to this location, travelers to the city of Tyre would first encounter its prominent funerary buildings. 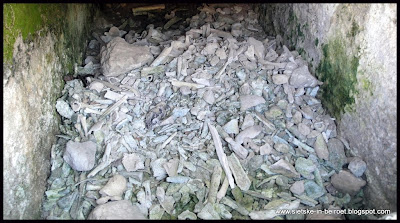 All the tombs have long been ‘emptied’ and the shattered bones are left.
And then of course, there was this ‘After midday, the state-run National News Agency said Lebanese army experts also defused a hand-grenade that was planted on the main al-Hawsh-Ain Baal road in Tyre. It said the grenade, which was tied to a wire, was set to explode', which gave the trip some extra flavor. If we had we known. But I had to read it this morning in the paper.
Geplaatst door Sietske op 15:34

Hi Sietske,
I read your blog pretty often. Have you been to Baalbek yet? I was really impressed by it, a little less so by my admittedly more casual glimpse of Tyre.
Good luck with the future project! best, KP

Good idea. In Holland there is the Limes-project (www.limes.nl). While there is little to see in comparision to Lebanon, it still works.

I think mapping the Roman roads & bridges would be a fabulous project for some graduate student at AUB - you should talk to the archaeology dept there!
And you don't have to wait until your next life - check out University of Leicester's distance learning courses in Archaeology & Ancient History :)

Since we met I keep reading your blog and every time I do so you amaze me with you're writing skills.
Thanks for making me smile with you're funny remarks.
Please send my love to your family and to Marijke (and the rest of her family) and Joke.
I'll never forget the fun we had in Paris.
Take care of yourself and always stay the way you are!