On Ramlet el-Baida, and Almost Summer

Not yet summer, but we’re almost there. People are preparing what beach to go this summer. You’d be surprised, but with some 250 kilometers of coastline, you actually end up paying for a beach in this place. 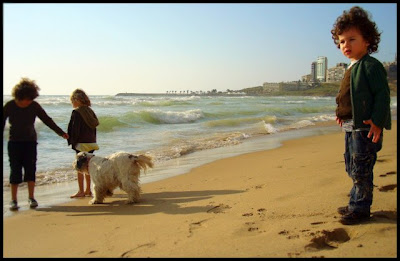 There are very few public beaches in Lebanon; those that are, are often very dirty, and practically impossible to go to in a bikini, unless you want to be ogled by everyone. Private beaches, which range from 12,000 LBP entrance for the basic (umbrella, lounge chair + waiter who will bring you cold beers) to more than 45,000 ($30) for the high scale (kids not allowed), are basically your European style public beaches; hassle free, although topless is where they draw the limit.
There’s only one real public beach in Beirut; Ramlet el-Baida, or white sands.
I remember during my very first summer month in Lebanon, I went to the Ramlet el-Baida beach on my own in a bathing suit. I drove there on my motorbike, towel on the back. After all, you do that in Holland too. I don't remember what scene that caused. None that I can remember.
Do I hear some ladies cringe? You couldn’t pay me enough now to go and lie on Ramlet el-Baida in a bikini this summer, or any summer for that matter, but I didn’t know then that this was just ‘not done’. I did notice that there were few women, and those women that were there either didn’t swim, and sat on the shore fully dressed, or wore pants and shirts while swimming. 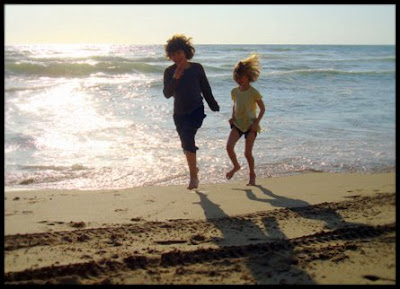 When I went into the water, (remember, I was quite young and cute then), so would the entire male population of the beach, and when I would get out, so would all the men. There was even a group of Syrian soldiers (didn’t know they were Syrians then, just thought they were Lebanese regulars), that were based near Beau Rivage (an occupied hotel where the Syrian Military Secret Service conducted ‘interviews’).

The name ‘Beau Rivage’ in those days had a very ominous ring to it, like the proverbial ‘one way ticket’. Hubbie once spent a couple of nights there in the late 80’s. He still has the jacket he wore the night they picked him up, and he’s quite attached to it, because he came out again. There’s scores and scores of people who knew loved ones that were brought there, and then vanished. Forever.

Nobody bothered me on the beach that day, though. Maybe it was because of the Syrians. You didn’t want to mess with those guys. The name ‘Ramlet el Baida’ these days is synonymous with luxurious high rise apartments. What a pity; you’re looking out over a wide sandy beach but you can’t/won’t lie on it. 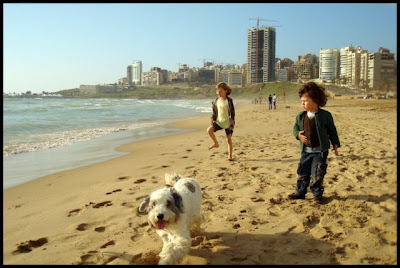 Anyway, these thoughts came up this afternoon as I took a variety of dogs, kids and cousins for a walk on the beach; Ramlet el Baida. It’s not summer yet, so the beach is not crowded, but the weather was gorgeous.
Geplaatst door Sietske op 20:04

It was forbidden to swim in Ramlet El-Baida before the war due to dangerous currents and many people drowned since it became a public beach in 1983.

Seitske, was the beach clean when you took those pictures?

You beat me to it. Prior to the civil war swimming that beach was forbidden to very strong under-current. Big danger signs were posted.

I used to go a bit further south to Saint Simon beach, which was also private, but with fantastic white sand and great surfing.

Ramlet El Baida back then was also famous for drag racing. We used the middle road. Spectators will line up on the ledge above it on NW bound road.

Porches, muscle cars and fast motor bikes would drag there on the WE. The darak will chase us, but we came back and started over an hour later.

My father and I tested a Porsche Carrera on the middle road in 1975. I remember the drag race in the 80's as we used to live behind the International Hotel :)

Yes yes, beach was relatively clean. I don't know about the swimming though. Every summer you hear about people drowning all over the Lebanese coast, could be because very few people actually learn how to swim properly, so once pulled out, that's pretty much the end of it.
S

they're not able to have any public beach,
unable to convince any of their their martyr heroes to throw some tons of sand on the ugly rocks of beirut, trying to look like rio on a few meters,

instead they open boutiques like abc, downtown etc.,
than they complain! about traffic jam...

but let's not be ironic, these people consider they made a Revolution! cause they made a big picnic with flags in front of condy...

you see I'm optimistic, with a big smile when some of their politicians call them "oh Great people of lebanon!"

But war was only just the direct and logical continuation and following of a big traffic jam that probably went wrong, really wrong ; and all of this is called lack (absolute lack) of culture and civilisation.

look at "architecture", this massacre... look at the way they drive, absence of any culture, look at the women, ridiculous, and compare with local indians and sri-lankis (the only real future)

I bet that Carrera roared. That stretch of road was a godsend for fast cars hobbyiests. The only place in Beirut to do such a thing in a safe manner as nobody used that middle road back then. For the life of me, I still have no idea why they built the middle road (not that I tried to inquire).

Now to the public beaches in Beirut and I'm talking pre 1975, and to be fair, most of Beirut coastline is rocky with difficult access and not easy to build beaches, the ones that were built were for profit with exception of Bain Militaire. Starting from one end you had the St. George (private/exclusive), then AUB which was nothing fancy, then Bain Millitaire, then Long Beach and another one next to it which you either had a membership or paid at the door. Next one is a distance the Coral Beach hotel, then Saint Simon also membership.

To really have a public sandy beach like in other part of the world, one would have to do it much further south toward Damour. Don't know why they didn't do it. I'm guessing it's the distance.

Up north at Jounieh, most of the beaches were publicly accessed, but that changed in the 80' & 90', I think due to the tremendous growth of the town. Back then Jounieh was a very small and cute town.

You forgot the Saint-Balesh ;-)
For the middle road in Ramlet El-Baida, I heard that is was built because the road by the beach used to get inundated in winter by the waves.

I like that one, the 'Saint-Balesh'. Where is that one? In Beirut?

Oh yeah, I did forget saint Balesh. That was at the end of Raouche headland.

All you can swim for free.

Hey, it seems that you went to ramlet el baida, one thing, this is a muslim part of lebanon, offcourse people will gawk at you if you were in a bikini but if you go to the christian side there will be absolutely no harrasment whatsoever even if you were half naked private or not private, weather in lebanon is always 28celcius to 38 so starting end may through october this is the best for beach life, concerts D.j's and stuff like that, alcohol is also allowed wherever in christian parts like jounieh, jbeil, kaslik, amsheet....

Hi, as you may already discovered I'm newbie here.
Hope to get some assistance from you if I will have some quesitons.
Thanks and good luck everyone! ;)