So you want to know about the ‘unidentified bodies’? Well, here is the deal.
There once lived a Dutch family in Lebanon. Mom, Dad, and 3 daughters. They lived here for quite a number of years, and probably would have continued to live here for some more, had the civil war not interrupted that.
And so, in 1975, the family left for Holland. The father would fly back one more time to take care of any loose ends, and that would be it, as far as their Lebanese adventure was concerned. However, things did not go as planned. The plane, flight 204 from the Hungarian Malev company, never made it into Beirut. 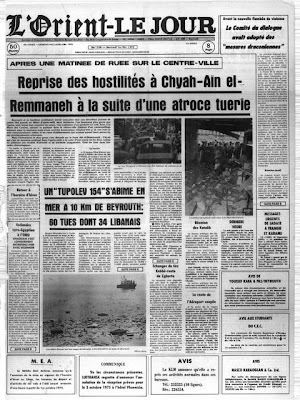 Front page of the L'Orient - Le Jour of October 1st, 1975, reporting on the accident.
Five miles outside Beirut, in the very early morning of September 30, 1975, it crashed into the sea. The cause remains unknown, but rumors have it the plane transported PLO weapons, and that the Israelis may have know about it. The black box was never retrieved, conversations between the plane and the tower never recorded and witnesses untraceable.
But what is even more intriguing is that the father, Koop van der Velde, disappeared. Of the 60 people on board, 37 people were retrieved from the sea in the morning. They were all found floating, amidst clothes and foam pillows, in a small area some 5 miles west of St. George. I’ve spoken with two people from St. George and I’ve spoken with men from the fire brigade (they retire at 62, and so they had a number of old-timers who still remember the accident) who helped picking up debris.
Twenty victims were identified by next-of-kin or employers, among them a few French nuns. My husband had a French teacher who was also aboard. But seventeen remained unidentified because next of kin was not present, or they were unidentifiable. Whether the Dutchman was among the seventeen is not known. For some reason, if pictures were made of the victims, they have not been dug up (yet).
However, this was in a time when the civil war had just started, some 5 months earlier, with the Palestinian bus. And fighting had basically not stopped since then. Beirut was literally in flames. The opera house had just burned down, the ship yard of the port had been set on fire and plundered, snipers were slowly creating a physical rift between east and west Beirut as it became harder to move from one city side to the other, religious cleansing had begun, albeit on a small scale still, there were shortages of oil and flour, and power cuts had started. It was in the midst of this chaos that 17 unidentified bodies remained in the morgue of either the AUH or the Karantina Hospital.
And so the procurer general, a certain Camille Geagea (I don’t know if he is related to Samir), gives the order to have the 17 buried.
And that is where the trail goes cold. Because nobody knows where they were buried. Or whether they were buried. Or who buried them. Heck, the two hospitals even deny they ever had the bodies in the first place. 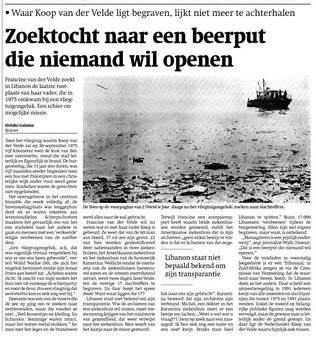 Article in Dutch newspaper Trouw (click on picture to link)
And although a Hungarian autopsy report mentions that there were bodies in the freezers of both hospitals, both hospitals maintain that they cannot verify that. AUH says they have – as far as they know – no files on this particular incident in their archives, and Karantina says their archives got burned, maybe. They don’t even know where their archives are, or are not planning to make a concerted effort to find out. But his daughter wants to know where – or if, he may not have been amongst the 17 – her father’s grave is.
And that seems to be a bit of a problem. As an unidentified person, you cannot be buried at a muslim cemetery, out of fear you might not be muslim, and the same goes for the christian cemeteries. So there has to be a spot where you bury people whose religion you may not know. Well, that’s asking a bit much, it seems. Nobody knows of such a spot. The hospitals send me to the Ministry of Health, who sends me back to the hospitals, who send me to the police who send me to the Internal Security and for every person you want to talk to, you need written permission from another office somewhere in town, and I have been trying to slash my way through this bureaucratic jungle without much avail.
You would assume that a burial, done on October 2nd or 3rd 1975, would have been registered somewhere, no? I mean, if you see the type of bureaucracy you have to go through when doing anyhting in this place, they probably have 7 copies of it too.
And this whole idea of looking for a mass grave seems to get everyone jittery. “You want to dig for bodies?” a doctor at one of the hospitals asked. “My God, you know what will happen? Everyone in Lebanon will start digging! You don’t want to know what is in the ground.”
Better left uncovered, or so it seems. There are an estimated 20,000 Lebanese still missing. I am not sure who came up with that number, but that keeps popping up. I have not been able to find a central registration office for missing persons, so these 20,000 may be ‘guess’-timates. It also seems that the former militias would rather not uncover the victims of their crimes, now covered by the 1991 amnesty law.

And so what happened to this Dutchman remains a mystery. Anyone out there that can help us out on this one?
For more information, check out this web site.
Geplaatst door Sietske op 08:18

It is written that hostilities resumed between Chiah and Ain El-Remmaneh after a horrible massacre...I still remember those terrible days...

Not to be crude, but if it was possible to tell that he was not circumcised, then he might have been buried in a Christian cemetery.

Also, have you tried the Nufus? It might turn out to be yet another turn in the bureaucratic maze, but they register all births and deaths there. I even got the chance to leaf through a booklet containing all births within one year looking for my birth certificate once (the archives of the hospital I was born in also burned down during the war). Perhaps they also register the deaths of unidentified people. If you have the date, it should be easy to check (wasta would help).

If you do, let me know if you find my misplaced birth certificate.

Oops. That was a very jetlagged me.