MuhajaBabes (or; wearing the veil the right way)

Every now and then the 'scarf-debate’ flares up in Holland. It annoys the Dutch to no extent that muslims in the society are separating themselves from the mainstream Dutch with a scarf. Or even worse; a burqa or a facial veil. The Dutch are inventing all kinds of intricate rules and regulations to avoid having to face the veiled ladies in public.

It’s not just a Dutch issue though; this is an ongoing discussion in other European countries as well, with England and France at the forefront. And it’s always this debate about what the Quran exactly stipulates and how rigid some people interpret this. I must say, wearing a black facial veil while teaching pre-school or elementary children is really pushing it bit. On the other hand, wearing a veil to school shouldn’t be an issue, especially if you otherwise partake in school life and activities just as any other student would.

I daresay that this scarf issue would not have been a problem at all if it had been the Lebanese ladies introducing the veil to Holland.
Because the Lebanese have perfected the art of wearing a veil; they do it with pizzazz.
I call them ‘muhajababes’. (Muhajabe means veiled, or wearing the veil, and ‘babe’ speak for itself.)

Originally (or at least that is my understanding) the veil is supposed to draw away the attention to the attractive features of a woman. Which results in a rather drab affair. This is (usually) the case in Holland.

The majority of the Lebanese female muslims that do go veiled however (and the number differs from region to region), think that this part is open to interpretation, because they are having none of that. They make sure that veil and flare go together. They have perfected the art of wearing a veil with style, and made it into a fashionable item. And the result is in some cases absolutely stunning. 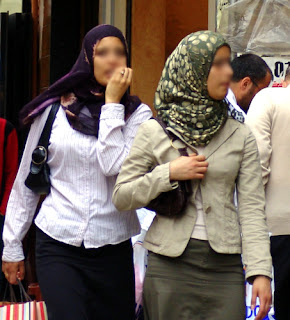 It must be said; no one can wear a veil the way the Lebanese ladies can.

Real muhajababes are in total control. They go around town on a quad (saw one last Sunday on the Corniche. Pink scarf, I am not making this up), can be found on the ski slope and run marathons in a jiffy. (all personally observed).
I have to say – and you may disagree with me – that in general shia (chador wearers excluded) carry it with a little more style than the sunni do. Can you tell the difference? Not always, but I’ve noticed that the tugging of the scarf into the collar is more of a sunni feature. (More on veil variations from the BBC. Go to ‘veil variations’ in the side bar and click on ‘veil styles).

Ladies like the ‘muhajababes’ would have taken over Dutch society by storm. Instead, we’re stuck (in Holland) with the dull Turkish and Moroccan interpretation of the ‘hijab’ (veil). 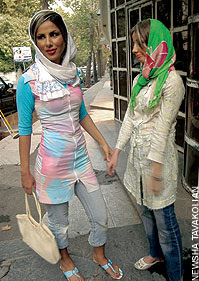 I suggest we start an exchange program (the Dutch Ministry of Social Affairs, I am sure, will pay for his); send some Dutch muslims to Lebanon, to show them how you can turn the veil into an article of clothing you just cannot leave home without (together with your Dior sunglasses and your Prada handbag), and send a contingent of Lebanese ladies to show Dutch society how it is really done. I bet ya; this whole scarf debate would be over in a New-York minute. Now how’s that for integration?

They have muhajababes in Iran as well. Check out these ladies (photographer: Newsha Tavakolian)
(Faces have been blurred to respect the privacy of the ladies that were photographed)
Geplaatst door Sietske op 16:41

Haha I love this post. While I was studying abroad in Jordan it was very easy to tell the nationalities apart by the way they wore their scarves. The Palestinian Sunnis wore black or white, the Jordanian Sunnis wore dull tannish colors, and the Turkish women (in contrast to the Dutch Turks) wore very colorful scarves. At school here in the states there are a ton of Malaysian and Pakistani Muslim women who wear rather drab scarves also (although I have one Libyan friend who wears beautiful scarves).

Mmmm Sietske, it's really time for you to come to Amsterdam and check out our MuhajaBabes... especially the ones of Moroccan descent. Nothing says 'fashionable' like their veils (color-coordinated with the rest of the clothes, of course). Honestly, I have seen sexier scarved-ladies here than anywhere in Beirut! But of course those are not the ones in the newspaper-pictures, unfortunately...

I was going to post a similar comment to Nicolien's: I have a feeling you would be surprised by the variety and stylishness of the veils (headscarfs seems too dull a word) the young Dutch-Moroccan women wear these days.

I don't remember where, but recently I read an article about a newly founded Dutch fashion glossy aimed at muslimas, including those who wear a veil.

Agree with Nicolien and Myrthe. However, additional training would be appreciated, so could you please send over the two ladies in the last photo to Amsterdam?

Yeah, it's always fascinating to see women here wear a veil AND make up. The first is to hide your beauty while the last is to accentuate it. S'ppose i will never get this:-)

BTW, did you read the book called Muhajababes by Allegra Stratton? Not that it's recommendable, though (the book actualy sucks big time), but it touches on some same points you're making in your post, which is much better. Love the pics, also!

Regarding Dutch muslimas wearing the veil. I once read the comment that the veil is what the punk hair-do was in the late 70s: a sign of protest against an increasingly suppressive society.

Sure this is not the full explanation, but it somehow makes sense: nothing better nowadays to piss of the Powers That Be than to wear a veil:-)

Yes (Nicolien & Myrte), you're probably right. My vision is of Holland is a bit outdated, and the ladies of 15 years ago are obviously not what they are now. And indeed, what you see in the media is usually not a very accurate picture. I do belief that this does give an awkward impression. But good for the Moroccan ladies! I think it will definitely help the debate.

Anonymous: Sorry, but the ladies at the bottom picture are from Iran, I am afraid, not Lebanon, although we do have the like this as well.

Riemer: Horrible book indeed, from this Allegra Stratton, I didn’t finish it. I bought it because I liked the title (I think that is where we got the name from, actually) He (She?) has been in Beirut too, but I could not detect any line in his argument.
And I do agree that it seems at times a bit of a statement that may not necessarily be a religious one, but more of a political one. Just like letting you hair grow long in the 60-ies was a political statement.

Riemer, a veil and make-up I have seen here (in Amsterdam) too, but the following can only happen in Lebanon: my friend, her 4 sisters and her mom all wear the veil, and all 6 (six!) of them have had plastic surgery done on their nose. How's that for contradicting yourself :)

Sure you have something to say about the Lebanon conflict…Do it!

Márgenes Editorial is a group of young people who are currently struggling to achieve a good project at a Master in Book Publishing in Spain.

Do you want to help us create a great book?

Also, if you could inform other people who you think could be interested in participating, it would be great, thank you!

@Sietske,
I doubt that the writer came up with the title by herself. If so, it's the best part of her book;-)

I have never really understood the make-up & veil combination either. Let alone the plastic surgery and veil one! ;-)

FUCK U ALL! LEAVE PEOPLE ALONE AND LET THEM DO WHATEVER THEY WANT! IT'S NONE OF UR FUCKING BUSINESS!!!!
TOO BAD FOR U ! U HAVE NOTHING BETTER TO DO IN UR LIVES!
DNT BOTHER REPLYING TO ME I WON'T BE COMING BACK TO THIS SHIT HOLE AGAIN!
HAAAVE A NICE FUCKIN LIFE ASSHOLES!

Very interesting! Of course, to me, these muhajababes just look like every Islamic woman (older ones included) on the streets of Toronto today. I would be very surprised to see a burqa. I've been here for two years and only seen one once.

You know, perhaps it's that the veils AVAILABLE are not all that attractive. Recently, I Answered a question on Yahoo Answers from a young Saudi in the US. She asked if anyone knew where to get attractive hijabs since the stuff on the net is cheesy and poorly made and there's NOTHING available locally in small-town, middle America.

I wonder, honestly, if there were veils of the desired cut and style in better fabrics and fits available, if younger veiled women in "more conservative" cultures would wear them. There's a demand out there, but there's no supply.

The full covering niqab and burqa have nothing to do with islamic law, even in Mecca the holy of holies in Islam the women are required to show their faces.
And wearing a headscarf is supposed to be a thing of modesty and it should not be fancy or embellished, add to that that the girls who wear tight trousers are offending and not fooling anyone with their false piety.
I hate hypocrisy, and that is exactly what it is. THe clothes should not be form fitting and they should be decent, that is why a Shalwar Kamees is perfectly acceptable because it is modest.

Unfortunately, who had participated in answering her question, had mostly went off-track.. This phenomenon across the Arab and Muslim communities has nothing to do with Islam.. It is sort of fashion trend, where convenience, cheap and less harm to skin and hair are the main principles.. Also, it reflects sort of the religious tension and search for ID.. Bottom line: it interprets the theme of uncertainty, surrender and fear among the communities, magnified in the female dress, while the males are focusing on Hair-Gel and Waist-dropped Trousers..

I think this is an informative post and it is very useful and knowledgeable. therefore, I would like to thank you for the efforts you have made in writing this article.
عبايات جديد