Life in the Fast Lane

Tuesday; Afternoon strollers on the Corniche
People in Beirut live on a constant high. The Lebanese don’t realize this, because this is how they grew up. They don’t know any better. But for an outsider though, like me, it is obvious that the pace of living and the average stimuli are well beyond the ordinary. All your senses are constantly engaged, and you are forced to use all of your creativity to keep things going in this place. What happens to you here in a year, the average global citizen won’t experience in a life time.
Bus bombs, political assassinations, car bombs, Israeli bombardments, 1 million men demonstrations, street fights and riots, burning cars, closure of schools, besieging of governments, and political debates that are have spiraled into remarkable insulting sessions are just a few of the things that have taken place the last 12 months. And that is only on the public level of society.

Tuesday; Afternoon strollers on the Corniche

But even on a personal level most Lebanese live in the fast lane. People are constantly traveling in and out of the country. To jobs in Dubai, meetings in Qatar, weddings in Virginia, spring breaks in Paris, conferences in London and business trips to India. I see people that were bachelors only last week, and now are married with babies. They are constantly changing phones, cars, watches, wives and/or housekeepers. How they do it on the meager salaries that are offered I don’t know. Creative bookkeeping, maybe? Restaurants open up and close again before I even get a chance to realize they were there (let alone dine in them), and speed bumps appear and disappear (over and over again, I might add) within a matter of days
How this society comes to move so fast in a system that is positively antique is beyond my comprehension. A simple rain storm causes massive flooding in the lower parts of Beirut, road works cause traffic jams that affect entire city neighborhoods, mail gets delivered despite the clear absence of mailmen and the fact that nobody has a mailbox (apart from the ones at the post office). And then I haven’t even mentioned ‘minor’ obstacles, such as constant power cuts, salty water in you pipes (and appliances), and the engagement of less than legal services in order to get decent TV programming, semi-fast internet, and electricity in times of power shortages. Janitors that are lazy, service drivers that stop in front of you to negotiate with 2 ladies over a trip fare or a destination, and assholes that triple park in your drive way. 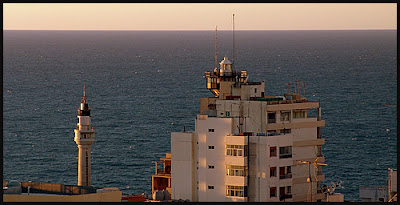 The 'old' (right side) and the 'new' (left side) light house in West-Beirut, although the new one is not really new anymore since the Israelis used it for target practice last July.

Some foreigners thrive in this environment. Others can’t hack it, and - if they’re expats – whine and vent their entire stay in Lebanon, or - if they’re here for the long run - end up divorcing their Lebanese spouse and run back home.
I am a ‘thriver’. The more chaotic it gets, the better I function. I perform well under stress, although hubbie will probably disagree with that statement.

In Holland we get a weather alarm when it snows 5 centimeter. Things just don’t happen to us Dutch very often. And if they do, like an exploding fireworks factory, we still talk about it five years later because the people that lived nearby are still having nightmares. Beirutis can’t afford to reminisce over trivial things like that. I interviewed a lady, right after the war, who was more concerned with the situation of her hair, now that her hairdresser’s salon was obliterated by bombs, then by the bombings itself. “Oh hon, if I’m going to fret over every single bomb, I’d still be living in 1975.”

Tuesday afternoon; Beirut and Mount Lebanon under a setting sun

Why am I writing this post? Because nothing 'significant' has happened in my life the past two weeks, and I am displaying withdrawal symptoms. Life is going too slow for me.
Geplaatst door Sietske op 21:27

your testimony is a precious one; if I may, I would also add from the global tonality of your writings, that you may bloom in the fast lane, but you also seem to keep a kind of logic and calm that my be a remaining gift from your dutch part...

When I returned home to the United States from Lebanon about seven weeks ago, I commented to my "friend" Ali who lives in Beirut, that I felt like the cars here were moving in slow motion. Then I realized my mistake,life was moving in slow motion! You have got to love the Lebanese.