Now that we’re talking about blood; I spent the morning in Nabatiyah for the annual Ashoura commemoration.
Ashoura is the tenth day (Ashoura means ‘tenth') of the month Muharram, and it is the day on which Hussein, the son of Ali, and grandson of Mohammad, the prophet, met his untimely demise, some  1,300 years ago (the year 61 in the Islamic calendar), in the desert of Kerbala, Iraq.
The story of the battle in the desert (72 against 10,000, according to the annals) is re-enacted every year in front of the mosque in Nabatiyah, south-Lebanon, complete with actors, horses and camels, since that day is quite significant for the shia muslims. 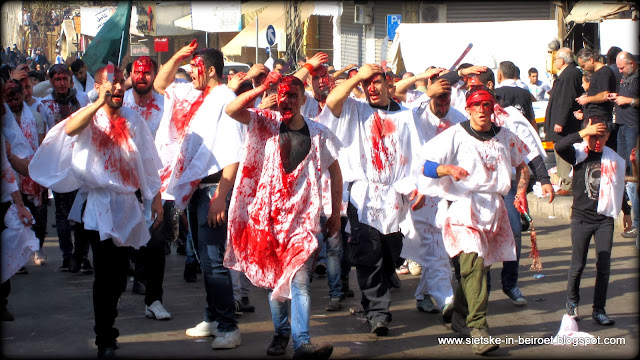 This is the day, basically, when a schism formed between the sunni and the shia muslims; a schism that these days is primarily a political one.
And with that reenactment comes the ‘tatbir’, the self-flagellation in order to remember the blood that Hussein shed for them.
I have been going to Ahoura for many years now.
Initially just as a journalist, to write about the rather folkloric approach of the inhabitants of southern Lebanon to the commemoration of the death of one of their martyrs.  This habit of self-chastising is frowned upon by most of the Islamic world, including the shia themselves. Hezbollah, for instance, won’t allow its followers to participate, and organizes blood drives instead.
But even if I did not have a story to sell, I would go to Ahoura. The odd things is that I seem to be only one that is going, as it is quite impossible to find a Lebanese – other than the ones assisting in the actual event -  that  is willing to come and watch.
My visits to Ahoura are frowned upon by my immediate surroundings. Most of my family members believe it is a thing from a prehistoric past that should have died out long ago. None of them have ever seen it in real life though.
My SIL thinks it is only something for tourists to go to. “You think all Parisians have seen the Cancan revue? That’s something only the Americans come to watch,” is her point of view. 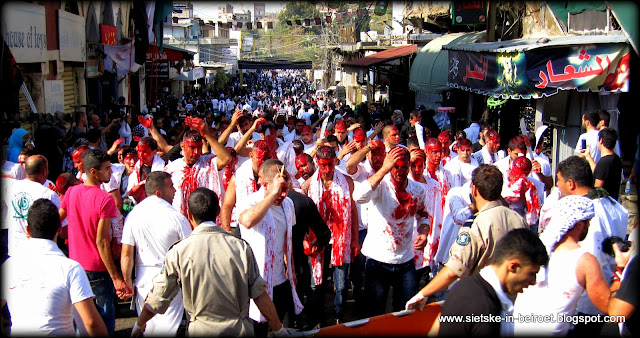 Whenever I mention it to friends, their reaction invariable is that it is a) much too dangerous (not sure what the danger is supposed to entail), b) much too dirty (okay, you’ve got to have a strong stomach or c) barbaric.
I disagree with the barbaric part. Christians have done this kind of stuff for ages, and are still continuing to do so. I see it as a folkloric remainder, a tradition – however unusual - that is maintained. If we are worried about languages dying out and animals becoming extinct, we should also watch for traditions that are about to disappear. And I enjoy this slightly medieval spectacle. The inhabitants of Nabatiyeh seem to enjoy it as well.
Although impressive and a little scary at first (bloody men waving long machetes and chanting in unison is a little daunting), you’ll find that the atmosphere is not threatening at all, but rather quite relaxed. You are more than welcome to take pictures of the crowd. After their rounds, the participants hang around town, pose for pictures, have lunch and joke with each other.
A cousin was in town this week. Her father is Lebanese, and so there’s a link to this country. It seems foreigners in general are quite informed  on the topic, as it features in the media abroad, and so whenever they happened to be in Lebanon during Ashoura, they all wanted to assist. And so these days, I go with foreign visitors. 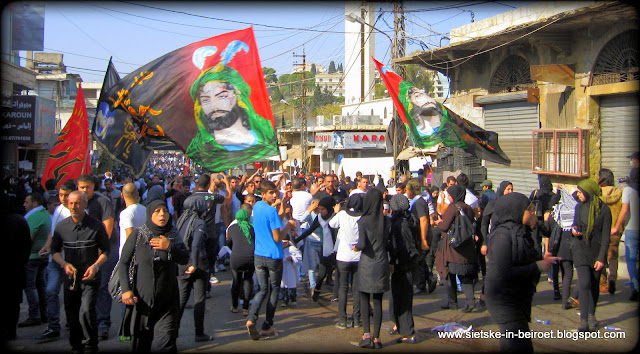 And for those who’ve asked about Spike, the unfortunate dog that got crushed last Monday morning; he’s alive (although still very much crushed) and will most likely make it. We can pick him up next week from the animal clinic. Pictures will follow.
Geplaatst door Sietske op 15:15

Is Ahoura a district in Nabatieh?

Is Ahoura a district in Nabatieh?

Ashoura is a Shitte holiday, Nabatieh is a place in Lebanon where this is celebrated in such a manner.

Thanks Sietske for the updates on Spike, looking forward to his recovery!

I also am surprised at how lacking interest the lebanese are in their own environment....it is so full of traditions that are dying or dead elsewhere, full of life and living...yet the lebanese just want to sit on their balcony and talk, talk, talk....politics, politics, always the same story...while we non-lebanese (married in) can't get enough of the place!! thanks for the demystifying of this....my Lebanese family will never bring us to the south....

Did you have to cover your head in a scarf like the other women ?

I am a muslim and when I see these wackos just go at it and beat themselves and soak in blood, I get so scared and sad. First of all if they knew their religion then they wouldnt be hurting themselves like that because it forbidden in islam to hurt ones body, kill people, kill animals etc. How embarrassing.